No Compromise on Strength.

The Australian Standards stipulate a range of scientific tests that a security product must pass in order to be certified. These standards are:

Independently Tested for the Ultimate Peace of Mind.

Our products are regularly tested by AZUMA Design and Testing, one of the only NATA approved test labs in the country.

The Impact Test is designed to simulate a physical attack on a screen. To perform this test, a large pendulum weight is used to generate 100j of impact energy at a specified point. In order to pass this AS test, the door or window screen must withstand a series of five impacts. 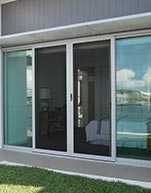 Australian Standard AS3959-2009
Bush Fire Protection—Secureview Eclipx stainless steel doors have been tested under this standard and satisfied the requirements for bushfire attack level (BAL) 12.5,19,29,40.